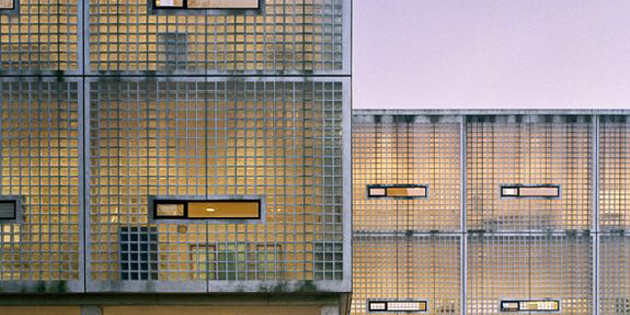 Although quarrels between the two banks of the Meuse are a thing of the past, some difference remain. The old centre is venerable and majestic, while the new district brims with growth and innovation. When a new university took up residence there in a former convent in 1974, student apartments became a hot commodity. And with any influx of students comes student life. All of a sudden, bars, clubs and small theatres popped up out of nowhere and cultural life bloomed. The essential factor in all of this was probably the abundance of available venue space. Maastricht once boasted an internationally-celebrated porcelain industry, which flourished during the 19th Century thanks to well-known companies such as Regout, Mosa and Sphinx. But business began to fizzle out and eventually factory after factory closed, leaving giant industrial spaces just sitting there, vacant and waiting for all these fresh young faces to move right on in, like hermit crabs.

Fashion designer Lena Berens is one of the many young people from various walks of life who have found their way to the city. To her, it doesn’t matter on which side of the Meuse things happen, as she adores the entire city. Origanally from Trier in Germany, Berens moved here to study fashion design at the academy of Fine Arts and Design Maastricht, considered one of the best of the country. Nowadays, you’ll find her sitting at her cutting table in her studio store on Witmakersstraat- in the old side of the town – producing her collection all by herself. Her beau, Milan palma, has his own atelier round the corner, where he makes leather bags, also by hand. “Fortunately, craftmanship is back in style,” she says.

From: Holland Herald, March 2016
Picture: Academy of Art and Achitecture